The committee will vote at a later date. Powell told Idaho Reports he feels good about his chances of confirmation, “but you always remain concerned until the final shoe drops,” he said.

Was Powell concerned about being the last to get an appointment letter? Not until last week, when the news broke about his lack of appointment letter. Powell, who took over ISP in 2013, had been erroneously told by a colleague that he was among the small number of agency directors who didn’t have to go through the confirmation process.

“I thought ‘Sweet, I’m in that group,'” Powell said Monday.

During Monday’s hearing, Powell fielded a question from Sen. John Tippets, R-Bennington, regarding the media’s characterization of his role in the Corrections Corporation of America contract problems. Powell defended his decision not to investigate, saying CCA’s forged time cards was a civil issue, not criminal, and adding the judgment wasn’t made recklessly or in a vacuum.

“Ultimately, yes, I’m the one that made that decision,” Powell said, but said all the stakeholders were at the table.

It’s important to note any criticism of Powell has been different than issues the legislature took with Luna. Much of the criticism Luna received came directly from her interactions with lawmakers — notably, not informing them of the state’s missing e-rate dollars, or the extension of the Idaho Education Network contract in the summer of 2013. (There is still no word on whether Luna voluntarily offered her resignation or if she was asked to resign.)

After Powell’s explanation of his role in the CCA investigation to the committee, there were no follow-up questions from senators.

Regarding other appointments, the governor still hasn’t appointed a director for the Department of Insurance, a spot that has been vacant since Bill Deal’s retirement last year. Otter will also have to appoint Luna’s replacement after the legislature adjourns. 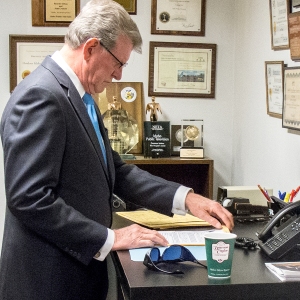